Staking-out the athletic tracks in a sports park

In 2013, the central stadium Portoval in Novo mesto has undergone an extensive renovation of athletic tracks – from synthetic coating including curbs, drainage, and athletic equipment. With the renovation of the dilapidated stadium, the investor, the Sports Agency of Novo mesto, also wanted to obtain the certificate of competence of the International Association of Athletics Federations IAAF, thus authorizing the organization of the most demanding domestic and international competitions in athletics.

Athletic facilities must be constructed according to international standards in order to provide competitors with equivalent conditions and comparability of results at competitive locations around the world. In order to obtain the IAAF suitability certificate, these facilities must meet stringent regulations according to geometry and permissible tolerances of dimensions and other conditions for construction.

Our geodetic works started with the establishment of a quality geodetic network, which was the basis for all further field measurements at the site. The network consisted of six geodetic points whose coordinates in the national coordinate system were measured using a combination of GNSS and the conventional terrestrial method of the geodetic survey, by offsetting the observations using the least- squares correction method.

Due to dilapidation, the construction contractors removed the synthetic base (tartan) on athletic tracks. It was necessary to check the condition of the asphalt substrate after the removed tartan, particularly the unevenness of the area. We carried out a detailed geodetic survey and produced transversal profiles, which clearly showed the areas of height deviations from the substrate. On this basis, the contractor could decide on the extent and method of removing unevenness on athletic tracks. By rough milling and leveling, asphalt surfaces were corrected so that the track became compliant with the required IAAF standards.

The geodetic works continued with the staking-out the inner and outer edges of the track and the objects of technical disciplines: for a high jump, a pole vault, a long jump, thrusting a ball, throwing a discus, a hammer and a spear. We recorded the newly built meteor shower, as well as all other newly established internal communal leads. The staking-out had to be carried out very precisely, as there was no room for error due to small tolerances.

During the stadium construction, we also performed control measurements of the performed works and compared deviations with tolerances.

As part of the renovation, the investor also carried out some other updates on the stadium: a new main entrance to the stadium and a plateau in front of a service facility, a new guard railing, a covering tribunes with the roof and the installation of reflectors for night lighting. In addition to all these changes and newly built internal utility leads, we have prepared a geodetic plan for the new state of the land in order to demonstrate the actual state of the new construction. The geodetic plan was the basis for the elaboration of the project of works carried out, which is necessary for the technical inspection of the facility and the acquisition of a building permit.

After completion of the construction works, the investor applied for the certificate of competence of the International Association of Athletics Federations (IAAF). The basis for issuing this certificate is a special report on the measurement of the competition, which is made by the IAAF-authorized geodetic company. Geodetic measurements for the certification of the athletic stadium Portoval were carried out by a Czech company, one of only three companies in Europe with a license to carry out such measurements.

Independent measurements confirmed the relevance of the renovated stadium to IAAF standards and Portoval successfully acquired the desired IAAF certificate. This success was also confirmed by the quality of LGB services in demanding construction projects when high accuracy of construction is expected and consistent compliance with the prescribed norms at low tolerances. 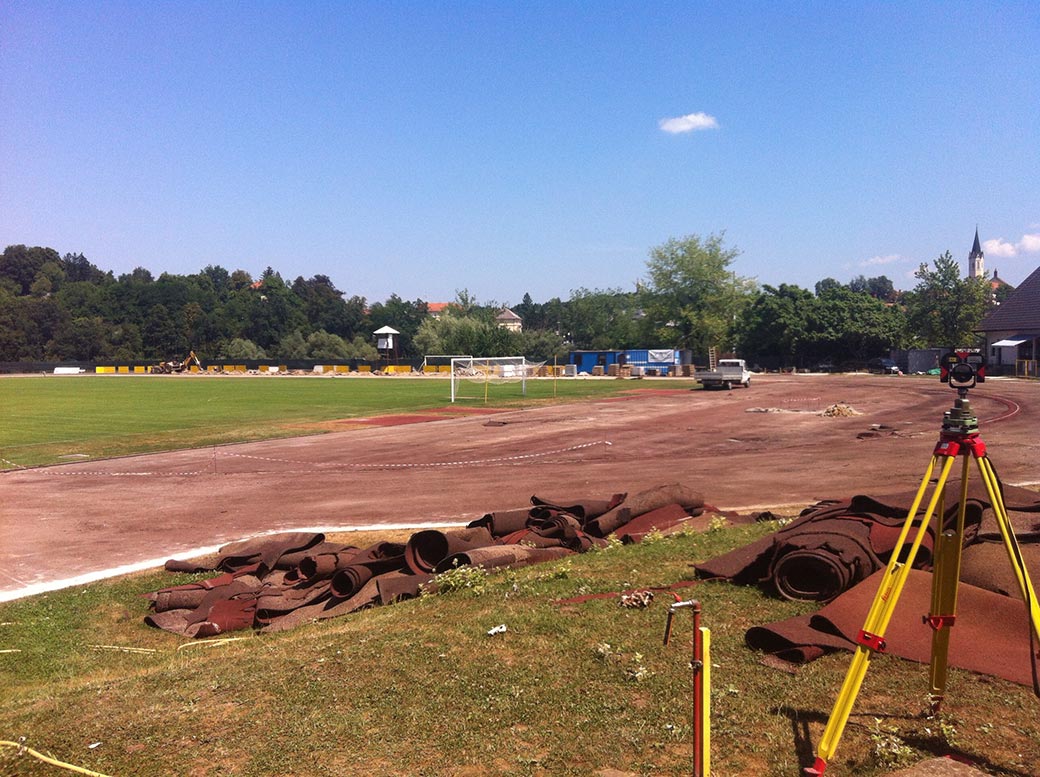